Basingstoke, 28. August 2008 - Sony’s BRAVIA VPL-HW10 projector is set to deliver the excitement and immediacy of HD to a new audience. It brings technologies capable of convincingly reproducing the cinematic experience within the reach of the non-specialist buyer tempted by the idea of HD Home Cinema. Featuring a new and stylish design, triple-panel Sony SXRD and 8-stage image processing by the renowned BRAVIA ENGINE 2, the VPL-HW10 is fully loaded with the features you need to do justice to Full HD.

Achieving the detail, clarity and naturalistic smooth motion of cinema is a challenge met by the Sony SXRD™ (Silicon X-tal Reflective Display) technology at the heart of the projector. The tiny and very closely spaced pixels create an exceptionally fine-grained image with no ‘screen door’ effect, while the super-fast 2.5ms response time means silky-smooth motion reproduction. To ensure the perfect image, the VPL-HW10 also has a full screen panel alignment function, allowing you to eliminate any coloured bordering at the edges of objects.

Full HD images generated by the projector are built up of millions of pixels, each only 7µm across. Whilst this is key to the impressive realism of the picture, it requires an excellent lens or detail will be lost. The VPL-HW10 is equipped with the All Range Crisp Focus (ARC-F) lens which has the necessary superior resolution and focus characteristics. The lens offers a 1.6x manual zoom and both vertical and horizontal adjustment, making it easy to set the projector up and achieve a good picture in a variety of environments.

The unique BRAVIA ENGINE 2 delivers vibrant colours and exceptional image quality. Its eight separate stages of image enhancement – carried out in real time – each has a specialised function. Together they generate a picture that is optimised in every way, from the accuracy of the contrast to the precision of the colour reproduction.

The Advanced Iris 2 contrast enhancement works like the human eye, responding dynamically to the level of light in each scene, always selecting the optimum contrast. With a very high range of 30,000:1 (the difference between dead black and pure white), Advanced Iris can bring out the detail in darker sequences and prevent bright scenes from looking washed out.

Something else that brings the VPL-HW10 closer to the capabilities of the human eye is its support for x.v.Colour. x.v.Colour is based on xvYCC, a new international standard for video that defines a colour space nearly two times wider than the existing sRGB standard. By allowing a colour palette much closer to the range of hues and gradients perceived by the eye itself, x.v.Colour is literally more lifelike. Deep Colour™ boosts the number of colours available within the xvYCC colour space from millions to billions, further future-proofing the projector against developments in colour handling technology.

In the event that you do need to adjust screen colours, the perfect tool for the job is provided by Real Colour Processing. This allows you to adjust the hue of a specific colour without changing the whole image. So if something like skin tone needs tweaking, you can do it without altering the colour of the sky or the background of the scene.

The inclusion of twin connectors with HDMI™ technology opens up another dimension for the VPL-HW10. It makes it possible to connect to video sources like Blu-ray Disc™ players which offer exact, 24 frame-per-second replication of the cinematic original. As the projector has the ‘24p True Cinema’ function, it can display films exactly as they were first recorded. By contrast, conventional transfers to DVD employ a higher frame rate and run approximately 4% faster than the original, affecting both the picture quality and the pitch of the soundtrack.

HDMI™ CEC technology also allows control of multiple devices from a single remote in a process called BRAVIA Theatre Sync. One Touch Play lets you insert a disc and press Play, at which point the whole Home Theatre system, including the projector, powers up automatically and the film starts. Conversely, System Stand-By shuts down all HDMI-connected elements of the system at a single press of the Power/Standby button on the remote.

Apart from bright lights, something else that can degrade the Home Cinema experience is noise from the projector itself. With this fully in mind, the air circulation system that cools the VPL-HW10 is meticulously designed and the fan runs at a whisper-quiet 22dB.

“Each element of what makes this projector so good is impressive enough in its own right,” says Josh Honda, Sony Senior Marketing Manager. “But it’s what happens when you bring them all together that really matters. Everything works together to give you the detail of Full HD with the clarity and smooth motion that are the hallmarks of a truly cinematic experience. And thanks to continuous engineering advances we can offer this for a price that makes HD available to a wider market than just the rich and famous.”

The BRAVIA VPL-HW10 is the gateway into the world of Full HD Home Cinema, but there is more. The soon-to-be-launched bigger brother of the VPL-HW10 will incorporate many high-end features previously unavailable in the upper-mid segment of the market, while the VPl-VW200 is and remains the flagship model, offering the very highest standards to those seeking to create the ultimate Home Cinema.

PLANET: As we manufacture, package and transport the BRAVIA VPL-HW10, we focus on three things: 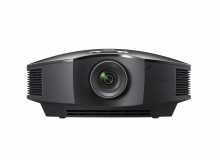 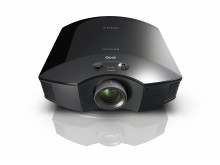 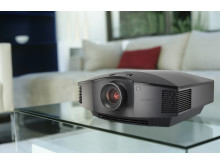