As of today, the Disney+ application is now available on select Sony BRAVIA Android TVs in the UK, Ireland, Germany, Italy, Spain, Austria, and Switzerland. Via the application, users can access the Disney+ streaming service directly which requires a subscription.

From The Walt Disney Company, Disney+ offers more than 500 films, more than 300 series, and a slate of 26 exclusive Disney+ Originals from the company’s unique and iconic catalogue encompassing such signature entertainment brands as Disney, Pixar, Marvel, Star Wars, and National Geographic. It is an ultimate destination for some of the most loved, recognisable and anticipated franchises and stories in the world including the Disney+ Original series ‘The Mandalorian’ from executive producer and writer Jon Favreau, blockbuster movies like ‘Captain America: Civil War,’ or classic Disney series like ‘Hannah Montana’ – all to entertain the entire family.

Sony BRAVIA Android TVs boast class-leading picture and sound quality with several exclusive technologies and features. Many of them support the Dolby Vision™ HDR format to deliver striking highlights, deeper darks, and vibrant colours, while Dolby Atmos™ compatibility brings space and realism to the audio to further enhance the Disney+ experience. The Android TV™ with the Google Assistant[1], Google Play Store and Chromecast built-in, offers users easy access to content, services and devices via its extensive platform. Sony’s original user interface menus and voice controls are also enhanced for better daily use. With the Google Assistant[2] and Amazon Alexa[3] enabled devices, you may cast and control videos from YouTube with Google Home or change the channel or volume with Amazon Alexa enabled devices. Apple® AirPlay® 2 users can stream movies, music, games and photos to their television right from their iPhone®, iPad® or Mac®. The Apple HomeKit™ technology provides an easy, secure way for users to control their television from their iPhone®, iPad® or Mac®[4].

Disney+ is the dedicated streaming home for movies and shows from Disney, Pixar, Marvel, Star Wars, National Geographic, and more, together, for the first time. From The Walt Disney Company’s Direct-to-Consumer and International segment, Disney+ is available on most internet-connected devices and offers commercial-free programming with a variety of original feature-length films, documentaries, live-action and animated series and short-form content. Alongside unprecedented access to Disney’s incredible library of film and television entertainment, the service is the new streaming home for films released by The Walt Disney Studios in 2020 and beyond. Visit DisneyPlus.com to subscribe and/or learn more about the service. 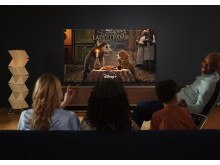