Sony today launched a new 4K Action Camthat brings together all of Sony’s imaging expertise to deliver a great video experience and will capture movies that users will be proud to share, save and keep to show future generations. The new 4K FDR-X3000R[vi] contains a wealth of technologies that have never been seen in POV cameras. This includes Sony’s patented B.O.SS technology which has been rolled out across Sony’s premium Handycam® range and for the first time has been adapted for use in Action Cam.

Designed with the changing real world usage model in mind, the addition of B.O.SS into this new model means that the user doesn’t have to worry about a jerky or jumpy video; they can focus on the activity they are participating in. The FDR-X3000R may be mounted on a bicycle or car, held in the hand using a range of optional accessories but will always deliver noticeably more effective image stabilisation[vii] compared to current models[viii]. This image stabilisation even compensates for strong camera shake and is available in 4K and high speed recording modes.

The new model comes supplied with Sony’s latest Live-View Remoteiv which is approximately 30% smaller than its predecessor[ix] and can be attached to mount accessories such as the optional Handlebar Mount (VCT-HM2) using the supplied mount adaptor. This may also be worn like a wristband or attached to various optional accessories such as Shooting Grip (VCT-STG1) or the new Finger Grip (AKA-FGP1) with the key advantage being control of shooting settings including power on/off and start/stop recording, without having to touch the camera itself. Users can also control the camera with their smartphones and tablets[x] with the free PlayMemories Mobile™ app. The new camera and Live-View Remote all feature a similar user interface and menu system, with a rich indication of camera settings that makes it easier to navigate menus and customise settings as needed.

In addition to being able to shoot beautifully balanced 4K video on the FDR-X3000R, this new model offers the option to capture approx. 8.3MP[xi] interval recording shots for stunning 4K time-lapse videosv. Simply edit with the free Action Cam Movie Creator PC software[xii] and share with whoever you choose to[xiii]. Be warned though, these results are likely to cause jealousy amongst your friends.

The marriage of ease of use and beautiful results has been enabled by a number of different Sony technological wonders which are hidden beneath the Action Cam casing. The FDR-X3000R is powered by the same BIONZ X processor which can be found inside Sony’s flagship ɑ7 cameras and optimised for use in Action Cam. Light is captured via a newly developed Exmor R CMOS sensor and the new ZEISS® Tessar Lens delivers a more natural image with significantly less distortion than current models.i The combination of image sensor and processor enables full pixel readout without pixel binning for truer colours and reduced ‘jaggie’ effects. You can capture high-bitrate recordings in 4K at 100Mbps, Full HD at 50Mbps in the XAVC S™ format[xiv] and the stereo mic ensures that sound is crisp and clear and benefits from Wind Noise Reduction so you can actually record the audio that you want[xv].

Features that have proved to be very popular on the existing Action Cam models have been retained in the new model. It includesangle adjustment of “wide”, “medium” and “narrow”[xvi] and smooth zooming (up to 3x), the latter being changeable during recording. It also offers Loop Recording, high speed recording in Full HD at 100p for stunning slow motion action[xvii],Live Streaming via the Ustream platform[xviii],Burst Shooting and the ability to manually adjust white balance and auto exposure shift. The FDR-X3000Rbenefits from a splash proof body and is supplied with a fully waterproof Underwater Housing (MPK-UWH1) that is effective down to 60 metres. It also offers an in-built tripod socket, giving the flexibility to attach to a variety of accessories without needing an adaptor or housing and all terminals have been placed on the back of the of camera, making it easier to use HDMI, the Micro USB or the microphone jack even when attaching the camera to various Action Cam accessories.

Sony’s own Highlight Movie Maker[xix] automatically selects points of footage, action scenes, and now people’s faces to create a short movie, complete with background music. GPS data overlay on video reads your speed data and location information recorded by built-in GPS and generates another video file that displays your route and speed information so that you can archive your adventures with complete accuracy[xx].

The growing range of Action Cam accessories is boosted further still by two new introductions that are ideal compliments to the new FDR-X3000R.The AKA-FGP1 Finger Gripallows for easy one-handed monitoring and operation of the Action Cam with Live-View Remote and tilts up to approx. 120 degrees for interesting low and high angle shots. The AKA-MCP1 MC Protector adds an extra layer of protection for the Action Cam lens, protecting it from dirt, dust and scratches when being used without the underwater housing. It has an advanced AR coating for great image quality and is even water and oil repellent.

[iii]Approximate effective megapixels. When SteadyShot is set to OFF and angle setting is set to wide

[vii]Distortion in image quality or out of focus shots may occur when used in close proximity to vibrating motors and engines. Image results can be improved by using Action Cam with the optional accessory, Motor Vibration Absorber for X3000/AS300 (AKA-MVA)

[xiii] The Action Cam App can also create time-lapse movies in Full HD. Requires version 2.0 or later of the application. Available for Android and iOS

[xvi]Medium and narrow are not available in 4K, time-lapse and high speed recording. 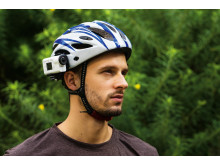 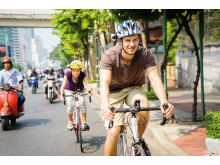 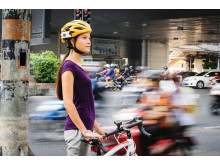 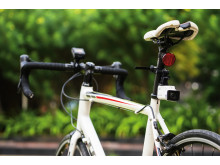 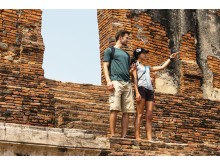 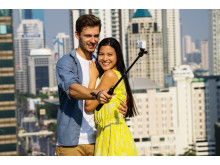 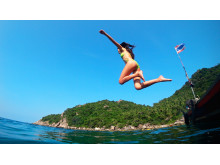 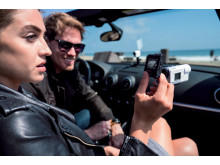 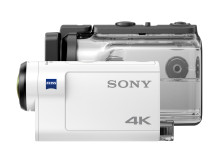 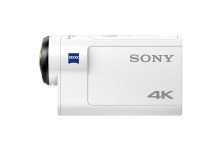