This Christmas a whopping 64% of Europeans will be staying in and entertaining at home instead of the ususal splurge on going out during the festive period in a bid to save money, an independent survey commissioned by Sony has found. That means the television will be playing a vital role in much of the entertainment, whether it be viewing cheerful Christmas programmes, playing group games on consoles, or watching the latest DVD and blu-ray movies. The survey revealed that when it comes to their TVs, 53% of Europeans value the look of their TV over the size. Whoever said size was important! Furthermore, out of the 5,000+ consumers surveyed, 58% felt their television would indeed be an important part of their festivities when entertaining friends and family at home this Christmas, proving discerning European consumers are not only becoming more design conscious but want to impress friends and family with their style!

The survey, conducted in UK, France, Italy, Spain and Germany reveals when buying a new TV 64% of people consider the design to be extremely important – something to bear in mind if using the savings from staying in to get that special someone something extra special at Christmas. “Consumers are now expecting their home entertainment products to do more and more, not only does this mean in the functions but also to reflect their lifestyles in the design,” commented Tak Kawagoi, director at Sony Design Centre Europe, “The design is extremely important. At Sony we believe TV should be something that can not only be integrated into the décor of people’s homes but also used as the focal point of their home entertainment – I’m sure a great deal of TVs this Christmas will be used for enjoying group games on consoles and gathering round for Christmas movies this year!” 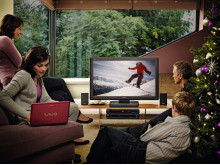 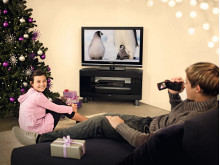 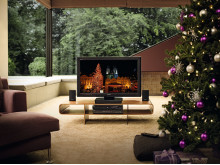