IFA, 28th August 2008 - Over the coming months, Sony will deliver an array of new technologies and world firsts to European customers. Europe is a key market for BRAVIA products and Sony is committed to establishing BRAVIA as the Number 1 LCD TV brand by giving its customers the absolute best in picture quality, technical innovation and product design. From the world’s thinnest TV to the world’s fastest frame rate, Sony BRAVIA is opening up the world of television like never before.

“In this market you cannot talk your way into first place,” explained Hiroshi Sakamoto, Vice President of TV Marketing, Sony Europe. “The products must speak for themselves. That is why we are announcing three world firsts for BRAVIA technology and a European first with the introduction of the OLED TV XEL-1. Sony is continuously striving to lead the way with advanced innovations in TV technology and cutting edge design. We're excited to see our customers' reactions.”

Using sophisticated algorithms, the Motionflow 200Hz system employed by the Z4500 calculates three additional frames for every original, upping the frame rate from 50 to 200 per second. The result is smoothest and clearest motion reproduction to be achieved by an LCD TV. A complementary image enhancement technology called IB Reduction (Image Blur Reduction) boosts the sharpness of the final picture by improving the original, frame by frame, before it is processed by Motionflow 200Hz. Whether allowing you to see the detail of a panning shot exactly as the Director intended or viewing the ultimate in smooth motion clarity for sports like football, the 200Hz Motionflow BRAVIA sets new standards in image quality and enjoyment.

The underlying superiority of the BRAVIA Z4500’s picture is attributable to the centrepiece of BRAVIA quality: the BRAVIA Engine 2. This new version of the acclaimed Sony signal processor uses proprietary technology to improve every aspect of the image, frame by frame, in real time. BRAVIA Engine 2 is even better at reproducing realistic black, depicting objects with impressively lifelike depth and detail, removing blemishes or ‘noise’ from the picture, and delivering that trademark vibrant BRAVIA colour. Contrast is also essential to a quality picture, and a very high screen dynamic contrast ratio of 80,000:1 leverages the work of the BRAVIA Engine 2 to the full.

BRAVIA is a brand with its eyes firmly on the future, and it creates products that are ready to take advantage of emerging trends. This is why the BRAVIA Z4500 is DLNA™ Certified (Digital Living Network Alliance), allowing it to be seamlessly networked with other DLNA™ Certified devices within the home, such as VAIO® PCs and the Giga Juke™ music server. Once connected in this way the BRAVIA Z4500 can be used to enjoy digital pictures and music stored on a PC somewhere else in the house.

A design masterpiece created to enhance the stylish living space, the BRAVIA ZX1 is guaranteed to catch and hold the attention. The extraordinarily slim 9.9mm1 Full HD display – as thin as a CD case - is a world first for an LCD TV, making it an instant technology must-have for the design conscious consumer. This remarkable advance in engineering was achieved by using side-mounted LEDs to illuminate the screen instead of the usual backlight array. Edge LED technology is the secret behind the world’s thinnest-ever production LCD TV.

Whether mounted on the wall or on its table-top stand, the BRAVIA ZX1’s aura of cool minimalism need not be marred by wires from set top boxes or other devices, thanks to ‘BRAVIA 1080 Wireless’ technology. The two-part system uses a super-fast wireless connection to deliver a top-quality HD signal from the Media Receiver, which contains the MPEG4 AVC HD tuner2, to the ZX1 in real time.

The picture quality is everything you would expect from BRAVIA. Even the most frenetic action has a lifelike smoothness and the impression of reality is further sharpened by the sheer crispness of the image. This is the visible effect of the interplay between two key BRAVIA technologies: Motionflow 100Hz with IB Reduction.

The meticulously designed RF (Radio Frequency) remote commander can be pointing anywhere in the room and still work perfectly. The BRAVIA ZX1 itself is equally versatile thanks to 4 HDMI™ inputs (1 x Display; 3 x Media Receiver) allowing it to connect to a sophisticated Home Theatre system like the Sony BRAVIA THEATRE DAV-IS50. It can even be used to control it, thanks to BRAVIA Sync technology. This uses the HDMI connection to transmit control information to other BRAVIA Sync-compatible devices. It can enable features like one-touch play and shut-down, which turns the whole Home Entertainment system on or off at once.

Created specifically for the European market by Sony’s EU Design Centre, the BRAVIA EX1 combines another world first technological innovation with exceptional visual appeal. The display is so slim that it almost begs to be hung on the wall using the specially made optional mounting bracket just 2cm deep (SU-WL700).

The look is intentionally in the picture frame style, and a choice of elegant black and silver bezel finishes and 40-inch, 46-inch or 52-inch screens means that the EX1 should harmonise with every decor.

To emphasise the BRAVIA EX1’s potential as a thing of beauty it can be set to Picture Frame mode, either displaying its own selection of superb quality images in Full HD, or using your own.

No matter how it is used, the BRAVIA EX1 has a very special advantage over normal TVs, namely the super-fast wireless link between its display and the Media Receiver, thanks to ‘BRAVIA 1080 Wireless’ technology. This part of the system has three HDMI™ sockets so it can connect to a sophisticated HD home entertainment system such as the BRAVIATheatre HTP-BD3IS , but there will never be a need to run a signal cable – or three – up the wall to the display. The wireless link is so fast it can transmit the HD signal in real time with no loss of quality.

Motionflow 100Hz technology doubles the standard frame rate for visibly smoother on-screen action, while IB Reduction (Image Blur Reduction) sharpens the original signal and ensures a pleasingly sharp picture. The renowned BRAVIA colour advantage is a core part of the BRAVIA EX1, partly thanks to the sophisticated signal processing carried out by the new BRAVIA Engine 2, and partly to the special qualities of the backlight. This produces a wider range of colour and deeper, purer primary colours. Subtle interaction with the colour enhancement provided by the BRAVIA Engine 2 results in a vivid, entirely naturalistic picture.

Sony is proud to be the first to bring OLED (Organic Light Emitting Diode) TV technology to the European market. The XEL-1 embodies all the advantages offered by OLED, which centre around the superlative image quality that the self-illuminating screen can deliver.

Unlike conventional LCD TVs which require a back or side-light illumination system, OLED screens actually emit their own radiance. When a pixel is off it is truly black – there is no faint leakage from the backlight – so the difference between black and pure white (the ‘contrast ratio’) is huge: in the case of the XEL-1 it is over 1,000,000:1. Such a vast range gives almost perfect fidelity, with light and shadow appearing completely natural, colour fantastically rich and detail always distinct.

The 11 inch OLED screen can be viewed from almost any angle without losing definition, and is capable of nearly instant response in a few microseconds, over a 1000 times faster than LCD TVs, so motion reproduction is exceptionally smooth, with almost no image blurring. Working behind the scenes, XEL-1 Fine Motion picture processing ensures that on-screen action looks as good as it possibly can. ‘Super Top Emission’ technology adds the final touch, decreasing reflected ambient light and boosting colour purity.

Another crucial advantage to having no backlight is that the screen can be incredibly thin, which enables a radical approach to the overall design. The XEL-1 fully exploits this, combining a daringly slim 3mm¹ screen with an innovative cantilever support rising from one side of the base. The result is utterly distinctive and an unmistakable statement of luxury high technology.

PRODUCT: BRAVIA LCD TVs are designed to be energy efficient. An Auto Shut-Off function places the set in standby mode when there is no input signal or after a period of inactivity. Power consumption in standby mode is below 0.2W for the Z4500 Series.

An integrated light sensor standard on all models described above measures ambient light levels and dynamically adjusts the brightness of the screen. This helps reduce operational power consumption to the minimum necessary.

For the halogen-free packaging 35% of recycled paper and VOC-free ink is used.

The instruction manual is printed on non-chlorine bleached paper with VOC-free ink.

PLANET: Sony is determined to lead the way as a responsible manufacturer. As a company we are focussing on three key areas of investment: 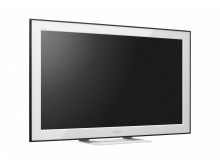 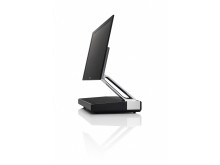 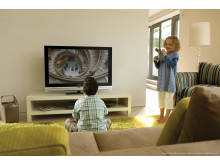 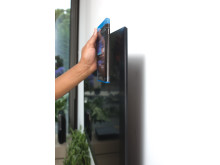