Cape Town, South Africa - Sony Corporation and FIFA (Fédération Internationale de Football Association) today announced an agreement for selected media rights of the 2010 FIFA World Cup™ in 3D. FIFA is to produce the world’s first FIFA World Cup™ in 3D. Up to 25 of the 2010 FIFA World Cup South Africa™ matches will be produced using Sony’s 3D professional cameras, which will provide coverage of the action that is unprecedented in depth, vividness and excitement to people around the world.

FIFA will utilize Sony’s experience and know-how of 3D content production to spread the passion inside the stadiums at the greatest sport event in the world to more people than ever before.

“Global sporting events such as the FIFA World Cup™ are very important drivers of new technology, particularly in the TV market”, explained Tom Morrod, Senior Analyst, TV Technology at Screen Digest. “ The news that the FIFA World Cup™ will be filmed in 3D for the first time will certainly increase the uptake rate of 3D TVs in the home and develop the installed base earlier than would otherwise have been the case. As a result of this news, and an increasingly bullish industry outlook on 3D, Screen Digest has increased its forecast, and now estimates that 13.6m 3D TV sets will be installed in Europe by 2013.”

“3D will undoubtedly transform the way we enjoy content in the Living Room,” said Fujio Nishida, President of Sony Europe. “At Sony, the 3D entertainment experience will not only focus on the 3D TV alone, but from 2010 will also encompass a range of 3D compatible products such as Blu-ray Disc players, VAIO notebook computers and PlayStation®3.  During June and July 2010 we will provide our European consumers with the most compelling 3D content to enjoy and experience first-hand, for example at the FIFA International Fan Fests.”

Viewers will be able to enjoy 3D experiences at the following locations:

By combining the excitement of the FIFA World Cup with 3D images generated using Sony’s technology and products, Sony and FIFA will seek to deliver 3D images that convey the action and emotion of the World Cup to viewers around the world, and a viewing experience as if they were on the pitch themselves.

*1 3D specification of BD is under consideration by the BDA (Blu-ray Disc Association).

*All trade names are either registered trademarks or trademarks of their respective holders. 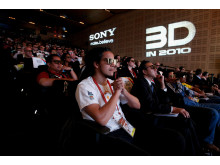 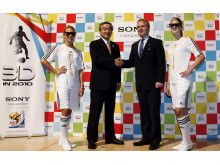 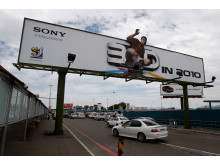