Sony’s latest lens-style cameras give you the best of both words, uniting the spontaneity and easy sharing of your smartphone with the imaging power and creative options of a premium camera.

Simply connect the camera to your smartphone via Wi-Fi. One-touch connection speeds by NFC for all lens-style cameras is faster than previously experienced, thanks to firmware upgrades for the QX100 and QX10 cameras[i]and improvements to the PlayMemories Mobile app. If you’re an Xperia[ii] phone user, hook-up times are quicker still!

It’s easy to control each lens-style camera with the latest release of Sony’s free PlayMemories Mobile app version 5.0 for Android and iOS smartphones. A new user interface simplifies the photography experience and makes one-handed operation a lot easier. Framing shots on your phone is more intuitive thanks to on-screen gridlines that now feature in the app. GPS adds location information to images that’s transferred to your smartphone while shooting[iii]. The camera shutter can now fire from the touchscreen; and with photographs automatically transferred to your phone you can share those memories instantly.

The ILCE-QX1 lets serious photographers make use of their precious E-mount lens collection. Just pick your favourite lens – zoom, wide angle, tele or macro – and unleash your artistry with control over exposure, focus and shooting modes.

That big sensor inside the QX1 also lets you create pro-style ‘bokeh’ effects with creamy background blur – a trick that smartphones can’t match.

Serious snappers and casual users alike are spoiled with a wealth of other premium features. Superior Auto recognizes dozens of different scenes – like landscapes or backlit portraits – adjusting camera settings for top-quality results without fuss. For those photographers who enjoy post-production editing, the QX1 can now shoot RAW image files and in a lens-style camera first, the QX1 debuts a pop-up flash to brighten up portraits, gloomy interiors and night scenes.

The LCS-QXA Case and Strap Kit adds a touch of luxury with its tough brown leather-look finish. The QX1 is protected snuggly, with a choice of shoulder strap or belt-mounting options while you’re out and about.

Smartphone owners know that high-zoom shots are a headache, often resulting in grainy images and camera-shake when you’re trying to get the big picture. The compact DSC-QX30 keeps things crisp and clear with its powerful 30x optical zoom lens, aided by Optical SteadyShot image stabilisation that helps eliminate blurring.

Users can smoothly zoom from a wide angle 24mm shot to a huge 720mm[iv] equivalent length at the telephoto end, for frame-filling full-length close-ups of somebody standing 40m away. If you want to go bigger still, Clear Image Zoom blows things up to a massive 60x magnification without sacrificing pixel count.

Awesome zoom power is matched by Lock-on AF and speedy continuous shooting at up to 10fps, letting you capture fast-moving action with a crisply-focused burst of split-second images. It’s a movie magician, too, shooting fabulous Full HD video at a smooth 60p frame rate at the touch of a button[v].

Meanwhile the QX10 gains two on-trend new colour variations to coordinate with today’s smartphones. As well as black and white, it’s now also available in eye-grabbing pink and copper finishes to add a splash of funky colour to your shooting.

While Sony’s lens-style cameras make great tools for flexible shooting, the optional ADP-FSK1 dramatically expands your choice of shooting style. Shipping as standard with the ILCE-QX1 and available as an optional accessory for all other QX models, this Free Angle Shooting Kit includes a tilt adaptor and a grip, allowing you to shoot from low or high angles or take effortless selfies.

[v] A memory card must be inserted into the camera for movie shooting, continuous shooting, and some other shooting modes

[viii] These accessories are optional extras


Sony Corporation is a leading manufacturer of audio, video, game, communications, key device and information technology products for the consumer and professional markets. With its music, pictures, computer entertainment and online businesses, Sony is uniquely positioned to be the leading electronics and entertainment company in the world.  Sony recorded consolidated annual sales of approximately $75 billion for the fiscal year ended March 31, 2014.  Sony Global Web Site: http://www.sony.net/ 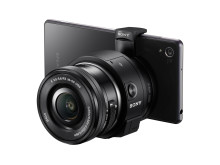 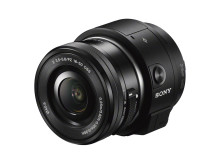 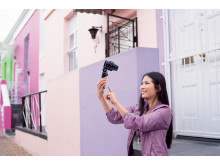 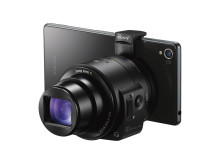 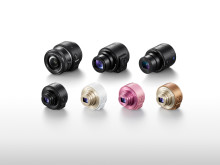 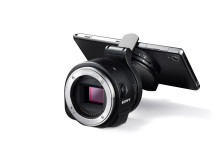 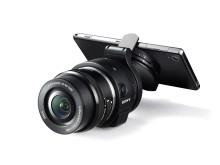 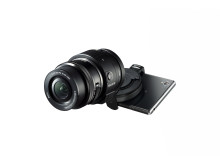 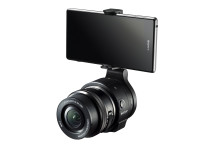 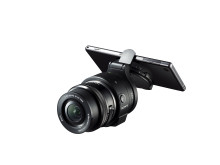