Sony Europe today announced the launch of “3D Experience”, a new, free of charge on-demand streaming service offering a range of promotional video clips and trial content in 3D, including highlights of “Wimbledon 2011”(*1), all in stunning 3D. The service(*2) will be available from July 13th to owners of 3D capable Sony “BRAVIA” LCD TVs(*3) immediately after purchase and without registration, and plan to expand to Sony’s 3D capable “Blu-ray Disc” Player and “Blu-ray Disc” Home Theater System. It will initially launch in five countries: the U.K., Germany, France, the U.S. and Canada..

“3D Experience” will provide instant access to an extensive range of 3D clips and trial content from a wide variety of genres, including movies, music, sports, and documentaries, with about 30 titles(*4) available at launch. Content available via this service will include highlights of “Wimbledon 2011” (held from June 20th), movie trailers from movies such as “Green Hornet™” and “Monster House” in 3D, and 3D music promotional video clips. Going forward, Sony plans to further expand the content line-up and promote “3D Experience” among content holders as a forum through which to showcase their 3D offerings.

Through “3D Experience”, Sony will provide an environment where users can actively discover and enjoy a variety of 3D content to further enrich their 3D entertainment experience. 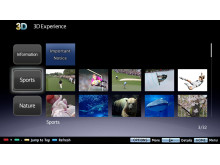