Sony makes 3D plus great surround sound simpler than ever with the arrival of three new systems designed to give room-filling audio without filling the room with audio equipment. All three systems have 3D pass-through on HDMI, and all feature 1000W of S-Master digital amplification hidden away in their compact subwoofers, which also act as the control centre for the systems.

Slim, compact speakers are used for front and rear channels, the HT-AS5 using the same speakers all round, while the HT-AF5 adds tall floorstanding front left and right channels for an even bigger sound.

The three new systems also have Digital Cinema Sound processing, developed in conjunction with Sony Pictures Entertainment, and this works with the Auto Calibration to give the most accurate, most involving home cinema experience.

HT-AS5: ultra-compact surround sound makes the most of the 3D experience
The HT-AS5 hides away its 1000W S-Master amplification in its subwoofer unit, which also contains all the audio processing for the system as well as an FM RDS/AM radio tuner. That just leaves four compact speakers on show, while Auto Calibration makes sure set-up is as accurate as possible, while the Digital Cinema Sound processing delivers the big screen sound experience.

3D pass-through is available on all three HDMI inputs, while the HDMI monitor output also has Audio Return Channel capability. This allows sound from a TV’s internal tuner to be delivered through the surround system, halving the usual cable requirement.

BRAVIA® Sync allows an entire home cinema system to be controlled from one handset, while the ‘Home Theatre Control’ BRAVIA® Internet Widget will allow the TV’s onscreen display to control the sound system.

HT-AF5: floorstanding front speakers for a bigger sound
The HT-AF5 has all the same features as the HT-AS5, but with a pair of taller speakers for the front left and right channels, giving a bigger sound more suited to larger rooms. The speakers can be used wall-mounted or on the floorstands supplied.

BDV-470SS: the complete ‘just add TV’ 3D home cinema system
Take the HT-AS5, add on the superb BDP-S470 3D Blu-ray Disc player, and you have the BDV-470SS all-in-one package. But there’s more to it than that: the system will also let you stream music, video and TV via the BRAVIA® Internet Video platform, access the internet or content stored on a computer using DLNA, and playback a variety of content from compatible USB devices.

You can even control the system’s playback functions over your home network using an iPod Touch or iPhone and a downloadable app.

All three systems will be available in June. 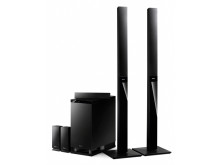 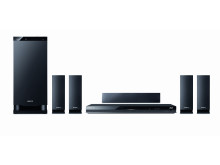 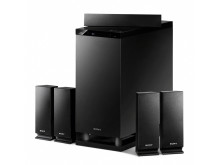