Tokyo, Japan – At the IFA consumer electronics show in Berlin, Germany, scheduled to begin on Friday, September 2, Sony Corporation will unveil its new lineup of products that represent the very best of its creativity and technological ingenuity. Underpinning the development and design of these products is Sony's philosophy of "inspiring and fulfilling your curiosity and moving you emotionally," which will be on full display at IFA 2016.

In advance of IFA's official opening, Sony held a press conference on September 1 (local time). There, Sony President and CEO Kazuo Hirai introduced the company’s newest audio lineup as an example of its dedication to creating more compelling and differentiated products. He touched on the PlayStation®VR virtual reality (VR) system, and went on to elaborate on various initiatives as Sony continues to identify opportunities for innovation within consumer electronics, such as the Seed Acceleration Program, Life Space UX, AI and robotics. He remarked, “We want our products to be at the ‘last one inch,’ at the closest point to you. Our relevance to you lies in continuing to offer emotional value through a wide range of products which are intimately involved in enhancing what you see, hear, experience and enjoy.” Hideyuki Furumi – Sony Mobile Communications Inc. EVP in charge of Global Sales & Marketing – then took the stage to unveil the new flagship smartphone in the Xperia™ X series and discuss the advances made in Xperia Smart Products, which propose new ways of communicating.

A video of the press conference can be streamed at the following URL:

Main Products and Prototypes Being Showcased

Triple image sensing technology, our unique camera development that allows you to faithfully capture split-second moments in any environment, works by fusing the following three technologies: 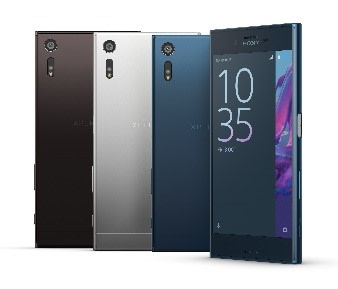 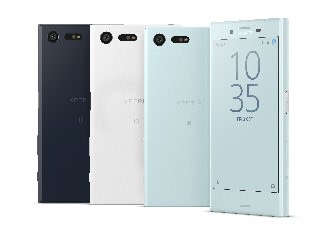 The two models also deliver significant advancements in video shooting as the first smartphones with 5-axis image stabilization, enabling you to capture smoother videos, even in close-up zoom. Furthermore, they are packed with intelligent features to optimize your Xperia user experience based on how it’s used, such as Adaptive Charging technology developed with Qnovo Inc. to extend the battery lifespan. Xperia XZ features a 5.2” Full HD display and metal casing for a perfect fit in your hand. Xperia X Compact features a 4.6” HD display. 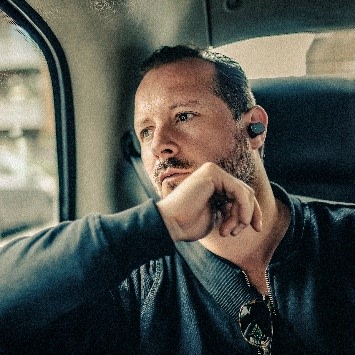 Sony also announced that Xperia Ear, its in-ear and hands-free Smart Product that brings a new way of communicating, will be available from November starting in select markets. Xperia Ear responds to verbal commands with intuitive operations, and through a wireless connection to your smartphone, it gives you information and assistance in a natural, authentic voice interaction. Equipped with Sony Agent Technology and a proximity sensor, Xperia Ear provides you with useful information such as your schedule and other personalized updates when you just place it in your ear, enabling you to stay connected while enjoying the world around you. Sony will also display Xperia Projector and Xperia Agent as concepts, combined with services from Yahoo Japan and Nestlé Japan, to give a glimpse of the user experiences offered by Smart Products.

Sony introduced a new “Signature Series” flagship line that represents the convergence of Sony’s superior analog and digital technologies that it has cultivated over many years. This series of High-Resolution Audio (“Hi-Res”) products is made up of the MDR-Z1R stereo headphones, two new WM1 series Walkman® models (the NW-WM1Z and NW-WM1A), and the TA-ZH1ES headphone amp. Sony has continued its pursuit of the ultimate materials and structures for reproducing the best sound possible, taking an unconventional approach to designing the Signature Series. The Signature Series faithfully conveys the heart and soul that artists pour into their music, from the sublime resonance of an orchestra to the overflowing passion of a live concert. The new series pushes sound to an entirely new realm – taking the headphone experience from “listening” to “feeling” it.

Sony also unveiled the MDR-1000X Hi-Res wireless noise canceling stereo headphones, which boast industry-leading*1 noise cancellation and allow you to enjoy high-quality music regardless of the surrounding noise. The headphones also feature modes that enable you to hear sound around you, from PA announcements at the airport to quick conversations, without having to remove the headphones. 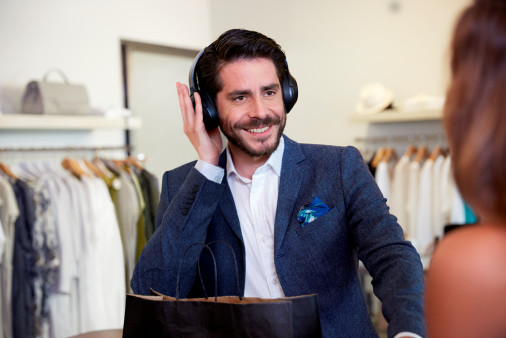 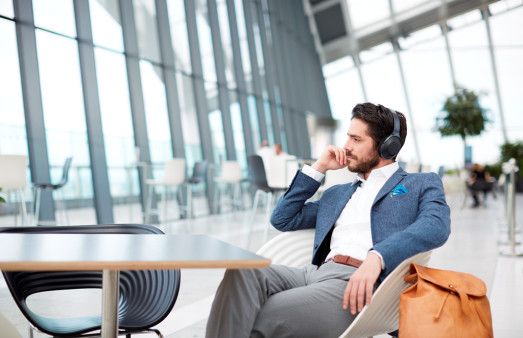 Additionally, Sony will display an array of other new audio products at its IFA booth. This includes Hi-Res high power home audio system (model MHC-GT7DW), two wireless Extra Bass™headphones for sports use (models MDR-XB80BS and MDR-XB50BS), and a NW-A30 series Hi-Res Walkman® that boasts improved ease of use with its 3.1” touch screen. Sony seeks to expand its lineup of audio products and propose new ways of experiencing music, in order to meet the demands of modern consumers’ ever diversifying musical tastes and listening styles.

Sony announced that the Portable Ultra Short Throw Projector and Glass Sound Speaker, already on sale in Japan and the US, are available starting today in the UK. The 10cm cubic Portable Ultra Short Throw Projector, in spite of its compact size, is capable of throwing up to an 80" image onto a table, wall, or any other surface you want to bring to life. Meanwhile, the Glass Sound Speaker fills every corner of your living space with warm LED and crystal clear sound made possible through its organic glass.

*2: Life Space UX is a concept defined by delivering unique experiences and facilitating new ways to transform your living space. 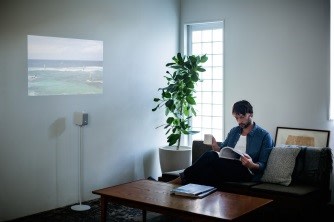 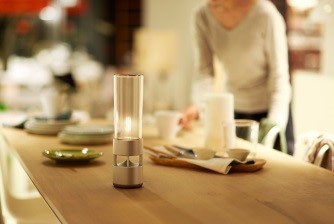 Sony’s new FDR-X3000R 4K*3 Action Cam is its first ever Action Cam to be equipped with the innovative Balanced Optical SteadyShot image stabilization technology, made possible by a newly developed lens unit. This ensures that captured video footage is smooth and stable even in 4K or high speed recording modes. A new wide-angle ZEISS® Tessar lens delivers more natural images with significantly less lens distortion. And with its array of accessories including the bundled Live-View Remote which gives you full control of shooting and on/off power settings at your fingertips, this Action Cam will serve your needs in various shooting scenes.

PlayStation VR (“PS VR”) virtual reality system expands the world of PlayStation®4 (PS4TM), enabling you to become enveloped in a fully realized 360-degree virtual world. By putting on the VR headset, you can enjoy an experience just like stepping inside the very game itself. Your head orientation and movement are accurately tracked, so that as you turn your head, the image of the virtual world moves along naturally and intuitively in real-time. At the Sony booth, a variety of VR content will be available for visitors to play, including the PS VR game “THE PLAYROOM VR,” which can be played in groups of up to 5 players, with 1 using the VR headset and 4 others using DUALSHOCK®4 Wireless Controllers.

Sony will also exhibit “T,” the second concept prototype from its Future Lab Program™research and development initiative which aims to co-create future lifestyles with users. “T” is built around the idea of making accessing information a more natural experience. It turns a tabletop or any other surface into an interactive display, projecting images responsive to touch input. The Future Lab Program will also begin accepting participants in the US for an early adopter program for its first concept prototype “N”, from September 1st. Please access the following website for detailed application guidelines: 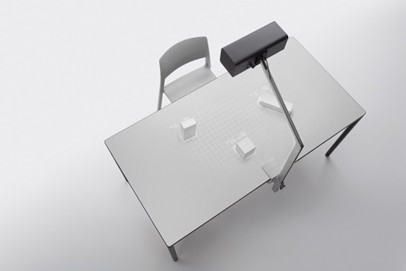 *For media inquiries: Corporate Communications & CSR Department*All product names listed here are trademarks or registered trademarks of Sony Corporation or of their respective owners.Sony will also feature the diverse products born out of the start-up projects from our internal new business incubation initiative, the Seed Acceleration Program; the autonomous drones and cloud-based data processing services for measurement and inspection that are offered by the joint venture, Aerosense Inc.; and Sony’s new educational kit called “KOOV,” which takes a fresh approach to teaching robotics and programming. 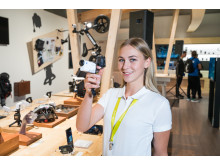 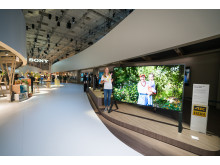 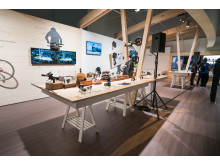 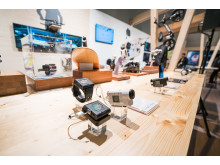 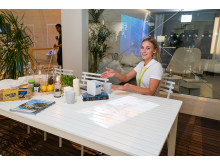 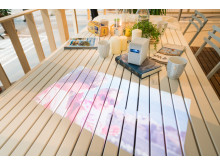 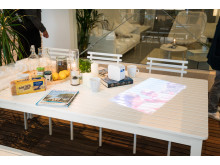 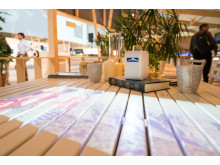 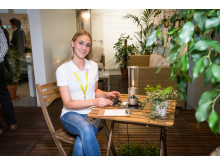 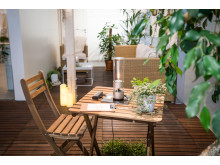 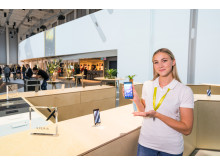 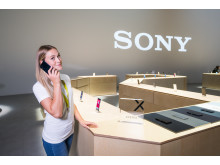