Boasting a multitude of advanced proprietary technologies and delivering a true harmony of pictures and acoustics with Sound-from-Picture Reality™, Sony’s XG95 series 4K HDR Full Array LED televisions will be available in shops from early March.

Sony Europe has announced pricing and availability for its premium XG95 series 4K HDR Full Array LED TV in Europe. Pre-orders of the XG95 have just started in select European countries with the TVs expected to become available in shops from early March.

As a Full Array LED TV, the XG95 delivers cinematic contrast and brightness for more accurate detail & depth, thanks to multiple zones of LEDs positioned directly behind the screen. Combined with Sony’s precise local dimming technology X-tended Dynamic Range PRO™, the XG95 can independently dim or brighten these individual zones of LEDs for greatly enhanced contrast and brightness.

Running on the powerful Picture Processor X1™ Ultimate, the XG95 provides a top-end 4K HDR viewing experience with a virtually unmatched level of detail and clarity. The Picture Processor X1 Ultimate can intelligently detect and analyse each object in the picture through Sony’s Object-based Super Resolution for exceptional accuracy and detail. Also, the Object-based HDR remaster allows each object to be remastered individually for better depth, accurate texture and all-in-all more realistic picture.

The XG95’s X-Wide Angle (in the 75” and 85” models) ensures the picture retains its quality regardless of the angle from which it is being watched. Sony's original optical design to control light from the backlight ensures colours stay true no matter the viewer’s position with reduced shifts when viewing the screen off-axis. Together with X-Motion Clarity™, which minimises motion blur without sacrificing screen brightness during sports and fast action scenes, it helps the XG95 overcome the usual challenges LCD panels face.

For even more immersive viewing, the XG95 series brings Sounds-from-Picture Reality™ with Sony’s innovative Acoustic Multi-Audio™ sound technology. Two sound positioning tweeters in the rear of the TV combine with the existing audio system to recreate sound coming from the centre of the screen, precisely matching pictures with audio.

To top it off, the XG95 TVs feature Netflix Calibrated Mode, IMAX Enhanced1, Dolby Vision™ and Dolby Atmos™2 to deliver the viewing experience just as the creator intended.

Smart features and ease of use

The XG95 series 4K HDR Full Array LED TVs operate on Sony Android TV which supports a wide range of apps from Google Play™, including YouTube™, Netflix, Prime Video and more3. To make the TV and home even smarter, the XG95 has Google Assistant built-in4. Additionally, the TV has a built-in microphone that will free users’ hands. Viewers can simply talk to the TV using Google Assistant to quickly plan the day, discover content, or to play TV shows, films, and more.

The XG95 will be compatible with Apple AirPlay 2 and HomeKit. AirPlay 2 lets you effortlessly stream content from your iPhone, iPad and Mac right to your Sony TV. Watch movies and shows from iTunes and other video apps, and view photos directly on your Sony TV. Play music or listen to podcasts on the television and AirPlay 2 speakers throughout the home – all in sync. HomeKit lets you easily and securely control smart home products using the Home app or by asking Siri on your Apple devices. TVs can be added to the Home app and included in scenes or automations with other HomeKit accessories. For example, users can create a “Movie Night” scene in the Home app to easily turn on their smart TV and dim the lights, and simply ask Siri to launch the scene. AirPlay 2 and HomeKit support will launch in 2019.

The XG95 features a newly designed premium voice remote, with a sleek, aluminium face, simplified button configuration and addition of RF for quick response and easy control without the need to point the remote. And a newly developed user interface brings seamless and quick access to favourite apps and settings.

1 Available via a future firmware update.

2 Available via a future firmware update.

Google, Android TV and other related marks and logos are trademarks of Google LLC.

Prime Video and all related logos are trademarks of Amazon.com, Inc. or its affiliates. 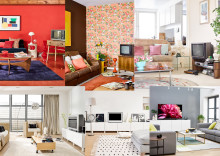 Sony’s ‘Evolution of the Living Room’ report reveals how inch size DOES matter in the front room and the impact streaming services have had on how we watch TV. 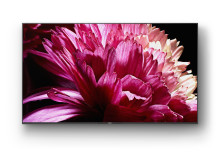 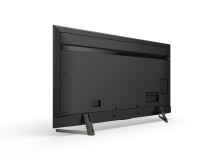 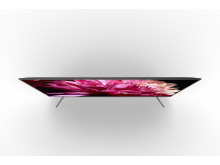 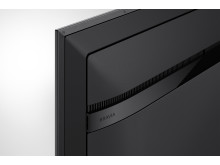 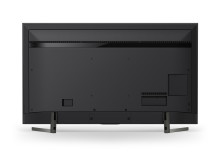 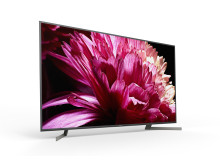 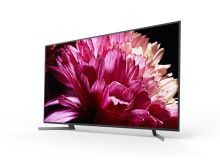 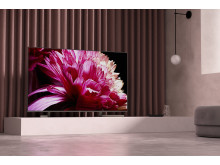 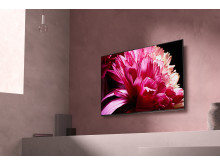 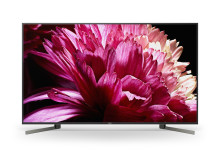 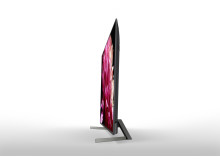