Discover a new dimension in home entertainment
3D technology was one of the big talking points at CES 2010, and Sony is following up its own 3D announcements with details of a new affordable Blu-ray 3D Disc Player. Following a software upgrade, the BDP-S470 will be ready to play Blu-ray 3D Disc movies on a 3D enabled TV. Forget about blurry, coloured pictures and cut-out cardboard glasses, 3D from Sony uses advanced picture technology and specialist Active Shutter glasses to create incredibly realistic depth and crisp, vivid 3D images in full 1080p High Definition (HD).

The  BDP-S570, announced at CES, will be capable of playing 3D Blu-ray Disc movies with no firmware upgrade, becoming the latest addition to an already burgeoning range of 3D products.

Building on an incredible Full HD experience, Blu-ray entertainment has now moved into a whole new dimension. With an increasing number of movies - even music gigs - being filmed in 3D, plus new TVs like the BRAVIA LX900 incorporating the latest 3D technology, with a 3D Blu-ray Disc Player  from Sony you can truly feel like you’re sitting in the middle of exciting 3D action in your living room.

Stream a world of Internet services into your home
As well as providing a gateway to the Full HD 3D experience, the Blu-ray Disc Players also give you easy access to a world of online entertainment. BRAVIA Internet Video lets you watch the programmes you missed on popular ‘catch-up’ TV services, the latest service to launch on the BRAVIA Internet Video platform is the BBC iPlayer™ which will be available on the new Blu-ray Disc Players in March. Catch-up TV is one of Europe’s fastest growing trends. It means you can forget the family arguments over the remote control and enjoy full-screen re-runs of your favourite TV shows at times that suit you.

For movie fans, there is also great news. Thanks to a tie up with Lovefilm®, subscribers will be able to stream movies directly to their screens via the new Blu-ray Disc Players.

There’s also a whole world of free, on-demand videos to explore from sharing websites such as YouTube™, Dailymotion™ and many more. There’s no need to hook up your PC or watch on a cramped screen; you can quickly access new videos and services as they’re added and stream full-screen content direct to your TV.

Use the built-in Wi-Fi capabilities of the S570 to connect to the Internet without the clutter of unsightly cables and start exploring everything BRAVIA Internet Video has to offer. Plug a Sony USB wireless LAN adapter into the S470 and enjoy the same capability.

An Entertainment Database Browser, using technology from Gracenote®, also allows you to browse details like actor and production information from a Blu-ray Disc and access related content found on BRAVIA Internet Video.

The S570 is DLNA enabled which means a new Blu-ray Disc Player from Sony can ‘talk’ to other DLNA enabled devices such as your phone, laptop or music player and play back stored content on your TV, no matter where in the house the device is located.

You can easily plug an external Hard Disk Drive or USB device into the front USB port of the Blu-ray Disc Players and enjoy movies, music or photos through your TV or home cinema system. With Blu-ray compatibility extended to an even larger range of file types, including DivX HD and MKV format, it’s easier than ever to share personal entertainment from all over the home.

Unique to new Blu-ray Disc Players and Home Cinema systems from Sony, users with an iPhone or iPod touch can control home entertainment using a free app that can be downloaded from the App Store. The app allows an iPhone or iPod touch to function as a remote control and includes the ability to access a Blu-ray Disc’s details such as jacket artwork, actor, and production information as well as search for additional video clips online.

Enhance your interior with an elegant, minimalist design
Sony’s new range of Blu-ray Disc Players is designed in the impressive Monolithic Design style. They are composed of luxurious materials and have a beautiful surface finish to fit in gracefully with your room design and create a sense of space.

The Monolithic Design concept is a distinctive feature of new products in the Sony home entertainment line-up for 2010. Put the new Blu-ray players with one of the latest BRAVIA TVs or home cinema systems and you can create a stylish design statement in your home.

The cutting-edge of home entertainment
“The latest additions to the Blu-ray Disc Player range for 2010 confirm that Sony is in a unique position when it comes to providing consumers with the full 3D experience, from capture to delivery,” says Stuart Kemp, Business Manager, Audio & Video Marketing Europe. “CES this year was dominated by a variety of 3D announcements, and the fact that we are already able to expand our range of 3D capable Blu-ray Disc Players shows our commitment to making 3D available to all.”

·         Enjoy movies & music throughout the home with USB connections

·         Enjoy movies & music throughout the home with DLNA & USB connections 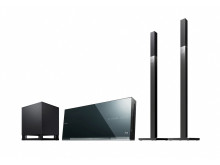 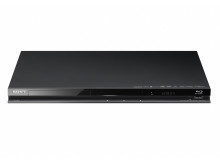 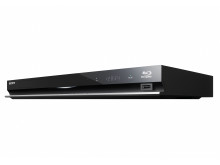