Weybridge, 31st March 2008 - The BRAVIA W4000-Series LCD TV from Sony embraces the future of television. Using an interlocking array of technologies to create exquisite image quality, it offers 1080p Full HD visual excellence for movies, games and photos. The elegant simplicity of the new “draw the LINE” design will complement almost any decor, while the special Picture Frame Mode enhances the living space by displaying beautiful HD photo images when the TV is not in use.

“The BRAVIA W4000-Series starts from a position of great strength,” says George Damigos, General Manager for TVOE Marketing. “Its combination of advanced picture technologies delivers a new standard of excellence which it deploys to maximum effect. And you quite literally see this, whether you are being blown away by Full HD resolution films or immersed in HD gaming, or quietly appreciating the richness and detail of a still image in Picture Frame Mode.”

The inclusion of the innovative Picture Frame Mode means that the BRAVIA W4000-Series actually enhances the look of a living space even when it’s not being used. Picture Frame Mode switches the set to a reduced brightness and displays digital photos in HD quality, with the natural warm characteristics of traditional film. You can personalise your TV with your own pictures from the USB Photoviewer or use the six pre-installed pictures, which range from Pop art to Van Gogh*. A Sony USB Micro Vault Tiny is the ideal storage medium for this – capacious yet barely visble once slotted into place. Picture Frame Mode uses approximately 10 per cent less power than TV viewing mode, so it helps reduce overall power consumption.

As well as the centralised control afforded by the award-winning Sony XMB interface, the BRAVIA W4000-Series features BRAVIA Sync technology. This uses HDMI1 connections to send commands to the various components of a Home Theatre system. So you can start watching a film on the Blu-ray Disc player with one press of a button on a single remote.

The extraordinarily vibrant and lifelike image characteristic of the Series arises from an interplay of technologies. Sophisticated signal processing carried out by the BRAVIA ENGINE 2 gives a depth, richness and clarity unique to Sony BRAVIA TVs. 10-bit signal processing2 and a 10-bit LCD panel3 yield 1024 shades of gradation between colours compared to the 256 available from normal 8-bit panels. In other words 64 times more colours, meaning a huge step closer to the subtle tones of real life. This is why the BRAVIA W4000-Series delivers a picture like no other.

A special Wide Colour Gamut Cold Cathode Fluorescent Lamp (WCG-CCFL)4 boosts the backlight spectrum beyond the limits of standard CCFLs, adding a further level of realism to on-screen colour. The very special effect of these technologies working together is called Live Colour Creation™, and is an essential part of what makes BRAVIA TVs visibly superior, and unique.

The Series also supports the extended xvYCC colour space5 for moving images -set to replace sRGB as the industry standard. Implemented under the brand name x.v.Colour, this feature gives BRAVIA W4000-Series televisions the ability to display content recorded on very new digital camcorders that use xvYCC. In the future, as xvYCC colour becomes widely used within the broadcast industry, the BRAVIA W4000-Series will be ready.

Perhaps the most fundamental piece of future-proofing is the inclusion of an integrated HDTV tuner and AVC-HD decoder alongside the DVB-T digital tuner. So there’s no need for a set-top box to access terrestrial HDTV programming where available. In addition, the Series is equipped with a cable TV tuner which can also handle HD services (subject to operator support).

Home Cinema enthusiasts are likely to be drawn to the 24p True Cinema™ mode. Cine cameras actually film at 24 frames per second, but televisions operate at a higher frame rate, so conversion has traditionally been necessary. The result is a 4% discrepancy from the original – the film on TV actually runs 4% faster than the original, and the soundtrack rises by 4% in pitch. When a BRAVIA W4000-Series TV is connected to a film source such as a Blu-ray Disc™ player, the original 24 frames per second are played just as the camera first recorded them. You see – and hear – exactly what you should.

The new “draw the LINE” design concept of the Series combines perfectly judged minimalism with the quietly luxurious Midnight Sky bezel colouring and subtly illuminated Sony logo. The result is a tasteful fusion of style and futuristic technology which can even become part of the decor thanks to the innovative Picture Frame Mode.

Sony is engaged in a constant review of its manufacturing, operational and business practices to ensure that its products are developed in an environmentally responsible way. This approach can broadly be divided into three areas:

PRODUCT: Like all BRAVIA TVs the W4000-Series is very energy efficient. The Auto shut-off function automatically places the TV in Standby mode when there is no input signal or after a period of inactivity. Power consumption in Standby mode is only 0.19W. Using an integrated light sensor the W4000 BRAVIA TV can automatically measure ambient lighting levels and dynamically adjust the brightness of the TV. This helps reduce power consumption to the minimum needed.
Halogenated materials can pose a risk to the environment if disposed of improperly. To minimize this risk, halogen-free flame retardants are used for all cover/housing plastic parts >25g.
The chemical specifications of flame retardants used in plastic parts are marked according to the International ISO Standard 1043-4.

PROCESS: To meet the requirements for recycling, all parts used in the production of the BRAVIA W4000 series that have to be treated separately are easily separable. Also all plastic parts >100g are made of one material or of easily separable materials. The Material codes of all the plastic parts >25g adhere to the International ISO Standard 11469. Recycled plastic is used for the W4000 series TVs.
For the halogen-free packaging 35% recycled paper and VOC-free ink is used. The instruction manual is printed on non-chlorine bleached paper with VOC-free ink.

PLANET: Sony is determined to lead the way as a responsible manufacturer. As a company we are focussing on three key areas of investment: 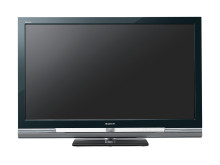