Having returned from its world-record breaking flight from the top of the Burj Khalifa in Dubai and soaring above the skies of Paris and London, the FREEDOM eagle has once again taken to the air; this time over the astonishing cathedral of Cologne, Germany.

Equipped with a Sony HDR-AZ1VR Action Cam, the eagle captured some incredible never-before-seen views of the city showing the beautiful Rhineland city and its majestic cathedral from the bird’s eye perspective.

It’s film is available for you to enjoy here: http://youtu.be/-vYoKgQpsFA

Sony is working with FREEDOM as an official sponsor, to help them achieve their goals of re-introducing the White-Tailed Eagle into its natural habitat in the French and Swiss Alps. Sony is providing its Action CamTM camcorders to FREEDOM to allow them to accurately document the flights of white-tailed eagles. FREEDOM is looking to use this footage to learn from the behaviours of the eagles to better understand the work that needs to be done to best prepare the terrain for their re-introduction.

The technical capabilities of the Action Cam by Sony in being able to deliver smooth Full-HD video content, benefitting from Sony SteadyShotTM technology, coupled with the ability to overlay GPS data on the captured footage means that it is the ideal tool for FREEDOM to gain the insights that they need to conduct their work. Furthermore, the small size of the Action Cam camcorders means that they can be easily attached to eagles and not restrict their natural flight in any way. 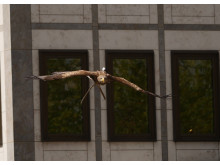